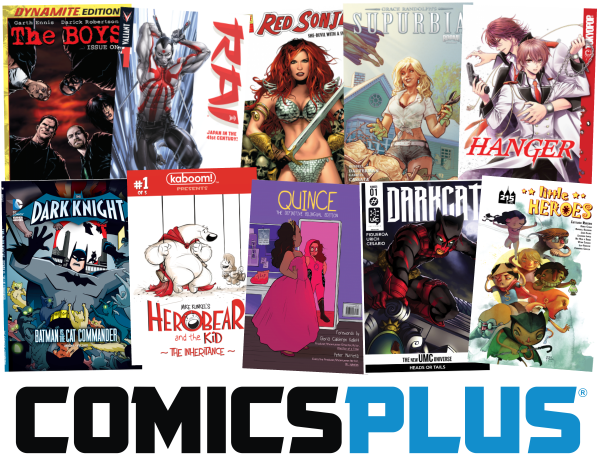 Superheroes are experiencing a renaissance as Marvel’s iconic characters have dominated the box office for the past decade while also finding success on small screens via Netflix and Disney Plus. Other superhero franchises have also found new audiences via streaming and traditional TV, including The Boys, The Umbrella Academy, and DC’s Arrowverse.

For voracious readers looking for superheroic adventures featuring new and familiar characters, Comics Plus’ Superheroes for Everyone collection includes everything from Batman and The Boys to exciting newcomers like Hajime Tsukomo, Herobear, and Lupe.

Herobear and the Kid: “Tyler’s family has just moved into his grandfather’s house, which means Tyler is starting at a new school—and things don’t go well, to say the least. But that stuffed bear is going to turn out to be more than a toy. This story was first published over ten years ago and won multiple Eisner and Ignatz awards; now BOOM! Studios is bringing it back, with bonus new material.” Good Comics for Kids

Princeless: Short Stories For Warrior Women: “Take all the cliches you can think of from the Fair Maiden genre of kids’ story, and then have someone skillfully rework them into a surprising, fun, witty and plucky tale of a princess who isn’t going to resign herself to tradition. This is PrinceLess, and #1 introduces us to Princess Adrienne, who is not fair, not meek, and may not even have the pipe cleaner arms ubiquitous to princesses locked in towers.” Sequential Tart

Quince: “Chronicling the trials and triumphs of Lupe who finds out on the night of her quinceanera that she’ll have superpowers for exactly one year, this YA book is a good buy that checks off several boxes: superhero comic, a WOC protagonist in the form of a Latina girl, fun and colorful art with an incredible story to delve into. I’ve been reading since the first few issues in and have followed the entire run and feel this is a really swell YA friendly title that packs a punch as it does laughs and tackling tough topics.” Black Nerd Problems

Faith: “There are moments when the comic, from writer Jody Houser and artists Francis Portela and Marguerite Sauvage, feels like a modern update of the classic Clark Kent story. But it also manages to find its own voice, and its own dark chords to hit.” Vox

Jalisco: “Jalisco is the origin story of a different kind of hero. Alicia does not strike the triumphant pose. She is a warrior of stealth, poise, and resilience. In the fight between a truth and an ugly lie, Jalisco stands as the champion who gives truth a fighting chance.” DC Comics

Hanger: “Between the layered and complex story, the incredible art, and the very organic Boy’s Love story, Hanger is a story I’m hungry to see more of. Many congratulations and applause to Tokyopop for sliding back into Yaoi (pun always intended) and bringing quality stories like this back into the forefront. I can’t wait for volume two.” Nerdbot

Supurbia: What goes on behind closed doors in a superhero community? Grace Randolph knows, and she’s letting us in on the secret. Supurbia is a unique look at the superhuman community, taking a behind-the-scenes approach to the archetypes all comic readers know. Comicosity

Catalyst Prime: Noble: “Lion Forge Comics launched the start of a shared superhero universe known as “Catalyst Prime” [in May 2017]… From that grand opening, [they launched] one new series every month for the next seven months, starting with Noble. It’s a huge new venture for the publisher, and one which lands them into a marketplace directly against the long-standing connected universes of companies like Marvel, DC Comics and Valiant Entertainment.” CBR

Red Sonja: “Red Sonja has become the archetypical example of the fantasy figure of a fierce and stunningly beautiful female barbarian who typically wears armor resembling a bikini or lingerie. The character now appears monthly in her own series, as well as a series of mini-series and one-shots, all published by Dynamite Entertainment.” Dynamite