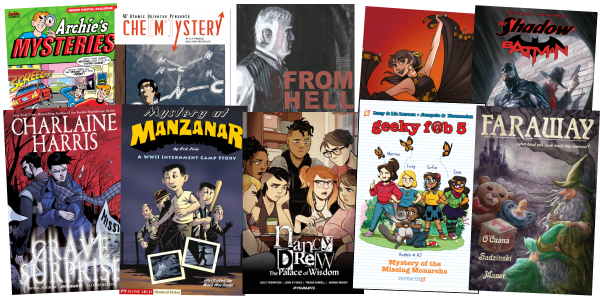 Everyone loves a good mystery; the kind that hooks you and refuses to let go until the plot unravels in twisty, surprising, and satisfying ways. The best ones—from Gone Girl to Serial to Tiger King—leave us pondering them days after completion. Comics, graphic novels, and manga deliver mind-bending mysteries, too, with the added bonus of beautiful, immersive visual storytelling.

If a picture is worth a thousand words, the comics medium might be the best way to dive into a good mystery, and our Mystery Reads for Aspiring Sleuths list of recommended titles has something for everyone. 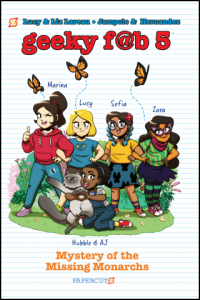 In this series for children, written by a mother-daughter duo of STEM enthusiasts, a group of elementary school friends solve mysteries of nature using science and facts. The so-called “Geeky Fab 5” are an adorable group of young ladies—math enthusiasts, car mechanics, budding journalists, nature lovers, and book worms—with bonus humor infused by a snarky cat companion.

In this entertaining outing, the friends must rally their town to stop the bulldozing of a monarch butterfly habitat. When speaking at City Council meetings and rallying the local news fail, the girls use math and creativity to solve the problem, and their pragmatic method brings the entire community together. The artwork is gorgeous and will appeal to young readers, while the story teaches without being heavy-handed. The entire series from Papercutz is a favorite of educators everywhere, and not to be missed. 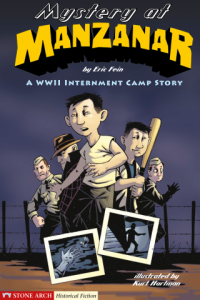 Before the recent success of George Takei’s graphic memoir, They Called Us Enemy, the internment of Japanese Americans during WWII wasn’t a common topic in elementary school American History lessons. Eric Fein’s memoir, Mystery of Manzanar, predates Takei’s, introducing readers to an interned Japanese-American, Tommy Yamamoto, and his family. Part chapter book, part graphic novel, Tommy describes first-hand his family’s confusion of being stolen from their home and eventually taken to the Manzanar War Relocation Center in California, one of ten camps where Japanese American citizens and resident Japanese aliens were incarcerated during World War II.

While similar in many ways to Takei’s experience at the Rohwer War Relocation Center in Arkansas, Fein’s story takes a turn into the mysterious when, having responded to the late night attack of the Yamamoto’s friendly neighbor, Mr. Sakata, Tommy finds himself accused of the crime. Already in a terrifying position with unfriendly camp guards, the reader is swept into the whodunit, made even more colorful through the lens of Tommy’s love for Sherlock Holmes mysteries. Tommy’s decision to solve the mystery and stand up for a friend, despite endangering himself further, will inspire young people.

While threats are always looming in this cruel environment, no violence is directly depicted. Engaging illustrations, large simple text, and a compelling mystery make this an intriguing read for all readers. Extensive back matter includes a glossary, discussion guide, and writing prompts, making it excellent classroom integration and community reads. 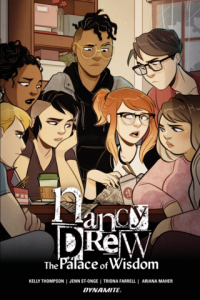 Since 1930, Nancy Drew has been an icon for budding sleuths—from books to television, and even in video games. Pair the plucky heroine with modern storylines, cool creators, and a diverse supporting cast, and you get Dynamite’s updated take which is introducing her to a whole new generation of readers. No longer the token female counterpart to the Hardy Boys, Nancy is now a high school entrepreneur, a total girl boss, who runs her own mystery-solving agency, complete with a personal secretary and flourishing clientele.

On the anniversary of her mother’s death, Nancy receives a threatening letter—via snail mail, no less!—from her old hometown and must return to follow the clues. Featuring characters of all body types, ethnicities, and sexual orientations, the friends all treat each other with honesty and respect—diversity in Nancy’s world is presented as simple reality rather than something exceptional. The artwork captures the youthful essence of the characters and there isn’t an adult to be found, making it an ideal read for teens who want to escape into a world that will feel familiar to their own while satisfying their interest in intriguing mysteries. 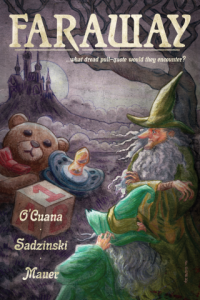 Fantasy and magical realms are trending as the popularity of Dungeons & Dragons and other role-playing games continues to grow with people of all ages. From indie creator Emmet O’Cuana, Faraway is a visual fantasy worthy of the biggest RPG enthusiasts, showcasing wry humor and an intriguing riddle: The battle between two wizards is interrupted by the most feared of creatures…a human baby!

The warring wizards must set aside their duel and work together to figure out how to stuff this human back into its own realm. This cheeky exploration of fourth wall concepts is a rollicking ride with a swift and satisfying conclusion. Parents, or readers with younger siblings, will particularly respond to the humor, horror and, at times, grossness that babies bring. Due to mature language and themes, this title is appropriate for older teens, enjoyable for mystery and fantasy lovers alike. 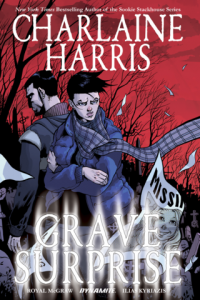 Fans of the long running HBO series, True Blood, and the series of novels that inspired it know Charlaine Harris can write a dishy mystery. Before Sookie Stackhouse, there was Harper Connelly. With aspects of Harper’s character loosely based on Harris’ own life, her propensity for sensing dead bodies in the ground due to suffering a lighting strike as a child is a quirk unique to Harper.

Emotionally and physically damaged, Harper makes the Grave Sight series of novels a must-read for tea cozy mystery fans, and the graphic novel adaptation ramps up the intrigue. The artwork—mostly shades of gray, like Harper’s worldview—knocks the dust off the old novels, modernizing characters and making the whole story more progressive. In this outing, Harper’s ability leads her to find two bodies buried in the same gravesite, forcing her and stepbrother Tolliver on a journey to discover whodunit. All is not what it seems as a third corpse appears in the same location. Talk about the bodies piling up!

Grave Surprise is for mature readers due to content and subject matter, but seasoned graphic novel fans and novices alike will enjoy the ride.