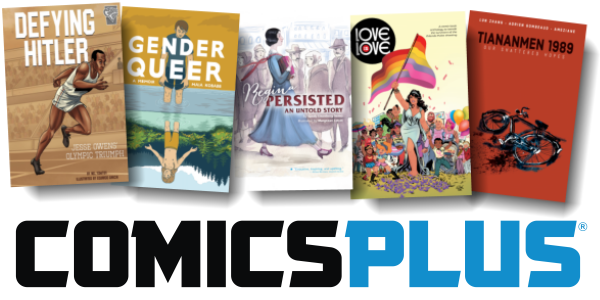 “Where, after all, do universal human rights begin? In small places, close to home — so close and so small that they cannot be seen on any maps of the world… Unless these rights have meaning there, they have little meaning anywhere. Without concerted citizen action to uphold them close to home, we shall look in vain for progress in the larger world.”

Every year on December 10th, the United Nations recognizes Universal Human Rights Day — the day the UN General Assembly adopted, in 1948, the Universal Declaration of Human Rights (UDHR). 2020’s theme is “Recover Better – Stand up for Human Rights,” focusing on the need to build back better from the impact of the COVID-19 pandemic by ensuring human rights are central to recovery efforts, because we share “an opportunity to reaffirm the importance of human rights in re-building the world we want, the need for global solidarity as well as our interconnectedness and shared humanity.”

The comics medium has a long history of social activism and support of universal human rights—from Captain America’s debut punching Hitler in the mouth in 1941, to The X-Men’s allegorical fight against bigotry debuting days after 1963’s March on Washington where Dr. Martin Luther King, Jr. delivered his historic “I Have a Dream” speech. Bestselling author Gene Luen Yang even modernized Nazi-punching in the 2020 Harvey Awards winner for Best Children or Young Adult Book, Superman Smashes the Klan!

Contemporary comics have expanded beyond the standard superhero pummels evil villain tropes, though, exploring real-life transformative acts and inspirational lives, telling stories that contribute to a broader view of our interconnectedness and shared humanity. Graphic novels like the March trilogy by the late Congressman John Lewis and They Called Us Enemy by George Takei, are among the bestselling and most critically acclaimed literature published in any format over the past decade. Comics’ unique ability to connect with a wide range of readers of all ages and abilities is why they are increasingly being utilized in classrooms and libraries.

To complement the best-known titles that spotlight our interconnectedness and shared humanity, we’ve curated a broader reading list for Universal Human Rights Day featuring additional titles for all ages that can help readers explore these concepts further, through comics. 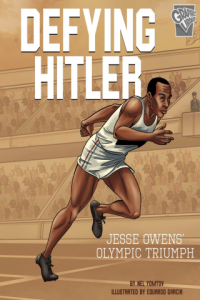 It was the 1936 Summer Olympics in Nazi Germany and the stage was set for Adolf Hitler to showcase a German victory in the 100 meters final. Jesse Owens—the youngest of 10 from a poor black family in Oakville, Alabama—was a favorite to win the race, but faced tough competition from the Hitler-favored German athlete Erich Borchmeyer. Defying Hitler chronicles Owens’ experience as he dominated the Olympics and brought home four gold medals for the United States, humiliating Hitler and proving that “white people weren’t superior to any other race.”

With simple illustrations and straightforward language, the story gives context to pre-World War II Germany, and summarizes the rest of Owens’ life, including his work with Ford Motor Company, representing the U.S. Olympic Committee, and winning the Presidential Medal of Freedom. Back matter includes a glossary of teachable terms. 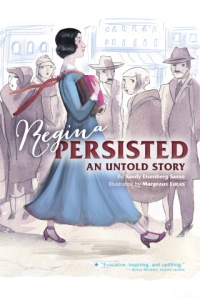 Before the Elizabeth Warren-inspired popularization of the term “Nevertheless, she persisted,” in 2017, there was Regina Jonas, a Jewish woman who wanted to be a rabbi. There had never been a female rabbi before Regina, but nevertheless, she persisted. When people told her “don’t make trouble,” or “women are not smart enough,” Regina persisted. Depicted in a dreamy green dress with her head literally in a cloud of books, Regina studies hard against a backdrop of gray and brown detractors. She learns Hebrew and persists in her studies even after her father’s death; even after being turned down year after year to take her rabbi exam.

When she eventually did pass her test, as a Jew in 1930’s Berlin, Regina persisted against even darker times. She taught lectures and drew huge crowds, refusing to leave her students until she was deported to Theresienstadt and eventually died at Auschwitz. Her story remained untold for 40 years until resurrected into this must-read by Rabbi Sandy Eisenberg Sasso and Margeaux Lucas. 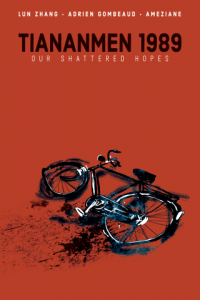 Where governments may try to wipe the record clean, history captured by the people who experienced it can immortalize events and ensure they’re never forgotten. Such is the case with Lun Zhang’s memoir which provides a first-hand account of the 1989 Chinese occupation of Tiananmen Square, along with the events leading up to the June Fourth Incident. Zhang’s sympathetic portrayal of idealistic Chinese youth is rarely depicted to Western readers, one he dedicates to those who did not survive to share the story for themselves. Ameziane’s art is muted, mainly sepia tones with stray splashes of color for effect. The book begins with a Dramatis Personae listing all characters and is broken down into sections by pertinent political timeframes, making it ideal for classroom integration and book discussions. 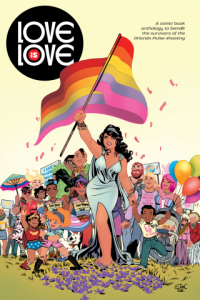 This anthology, conceived and published to raise awareness of and money for the victims and survivors of 2016’s Orlando nightclub shooting, is a perfect example of human rights advocacy leveraging the power of comics, and the therapeutic nature of art. Vibrantly illustrated essays, poems, and comic strips complement each other and affirm the idea that diverse, colorful differences create one beautiful, perfectly imperfect picture. Throughout Love is Love, the shooting victims and their families are given a voice, while contributors showcase the range of human emotions in the LGBTQ+ community—rage, hope, grief, and always, the sense of great risk that speaking out against injustice inherently brings. 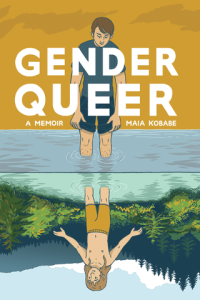 Artist Maia Kobabe, 2020 ALA Alex Award Winner, was a happy soul raised in a progressive household that didn’t enforce gender roles. It wasn’t until Maia entered grad school in 2013 when a writing prompt brought the need for this memoir to a head. Now identifying as genderqueer and using the pronouns “e, em and eir,” Maia’s painfully honest coming of age story captures all the confusion and pain of adolescence with the added uncertainty of not knowing where you stand in often rigid societal norms. Highly recommended for its candidness and relevance to the modern young adult experience, brief but detailed depictions of masturbation and sexual encounters make this ideal for older teens.