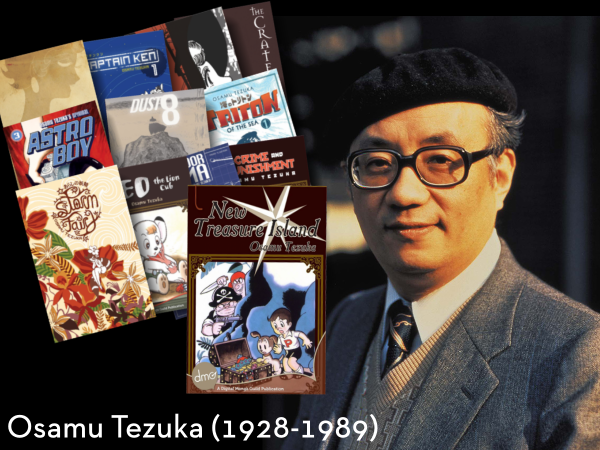 Manga has a face and it belongs to Osamu Tezuka.

The global popularity of any entertainment medium can usually be traced to either an artist, a group of artists, or a defining movement. In the case of the Japanese comics medium most commonly known as manga, that defining moment belongs to one of the most prolific storytellers in the history of comics.

Osamu Tezuka was a Japanese manga artist, animator, producer, and a medical doctor—and his impact on Japanese publishing was very much the same as Walt Disney’s influence on animation in the U.S. Even though manga had been a part of Japanese history for over 1,000 years, Tezuka single-handedly changed the reading culture when he published his manga adaptation of Treasure Island, at the age of 19.

New Treasure Island and the beginning of the Modern Manga Era

New Treasure Island is a Japanese manga by Sakai Shichima and Osamu Tezuka that was first serialized in 1947. Based on Robert Louis Stevenson’s 1883 novel Treasure Island, it is the first of Tezuka’s work to be published in tankōbon form—a standalone book, now the most widely recognized format for manga.

“Based on an original story written by a veteran cartoonist in Osaka, Sakai Shichima, Tezuka Osamu, who was not yet popular at the time, drew the pictures for Shichima’s book, which became his debut work. Its Western-style pictures and quickly unfolding storyline attracted a lot of attention, and his work became a best seller with 400,000 copies sold, laying the groundwork for the Manga craze. The original version of New Treasure Island was based on Tezuka Osamu’s manuscript, but substantial modifications were made by Sasaki Shichima, who cut nearly 60 pages and also changed some of the lines. When publishing The Complete Works of Tezuka Osamu, Tezuka Osamu remade it based on his memory to make it closer to his original.”

From there, Tezuka went on to publish over 700 titles spanning genres and subject matter, for audiences including beginning readers through adults. Along with New Treasure Island, he would publish a wide range of globally recognizable titles and series such as Astro Boy, Ambassador Magma, and Leo the Lion Cub, as well more sophisticated titles reflecting on humanity, like Dust 8, The Euphrates Tree, and The Record of The Glass Castle.

We’re honored to be able to offer a broad selection of Tezuka’s works that will give readers of every age a wonderful entry point into the diverse world of manga!

To learn more about Osamu Tezuka, visit his official website at tezukaosamu.net.