“Listen, please listen. Take a look at yourselves, right now… Is this who you really are?”

With American politics in the throes of a divisive election and a never-ending, unprecedented news cycle, intense focus has been given to every new development for at least fifteen minutes. As a result, current events sometimes defy easy comprehension, and seeing the bigger picture can be a challenge for many. How did we get here, and where does this moment fit in context of the relatively brief history of the United States?

While it remains important to study history—and, by doing so, hopefully not be doomed to repeat it—the purposeful inclusion of historical fiction in recommended reading lists can help curious and reluctant readers better understand current events and their relationship to American history. Good historical fiction personalizes the notable historical events they’re learning about, making history itself more personal, relevant, and timely to the reader.

Our American History/American Dreams list of comics combines great nonfiction and fiction titles related to America’s past and present that will engage readers through individual experiences that put the larger historical and political landscape they are studying, and inheriting, in context. 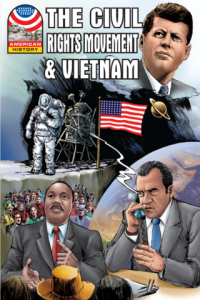 Beginning with the signing of the 13th Amendment in 1865, this graphic novel sets up a somewhat choppy, yet enlightening, portrayal of key events in American history related to the title. The Civil Rights Movement & Vietnam… shows a nation divided in similar yet different ways than we are currently experiencing, broken down into easily followed facts that make events such as President Kennedy’s assasination and the confusion of the Vietnam War approachable for young readers. Depictions of episodes that may be new material for kids—such as the tax evasion and resignation of Vice President Agnew and the impeachment of President Nixon—will resonate with current events yet also lend a strange sense of comfort: America has been rocked by political scandal before, yet the nation still stands.

The use of muted colors and simple illustrations lends an appropriately hazy feeling to these echoes from the past. 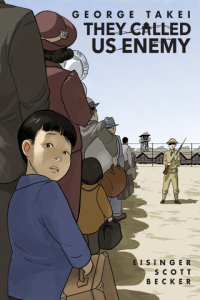 They Called Us Enemy by George Takei

The New York Times bestselling, Eisner Award-winning graphic memoir is George Takei’s firsthand account of life as a person of Japanese descent ordered to live behind barbed wire in a “relocation center” during World War II. This astonishing memoir examines what it means to be American as a child living under legalized racism, and how it shaped Takei’s future as a beloved icon and activist. More importantly, the sympathetic portrayal of Japanese Americans forced into internment camps humanizes immigrant families while shedding light on a historical period in America that even adult readers may not fully comprehend.

Enemy is an absolutely essential read for all ages, both for its relevant subject matter and for the abundance of teaching and instructional resources related to it. 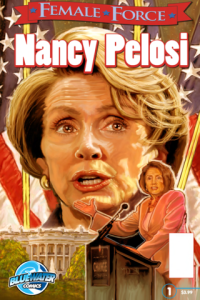 For many young people, Speaker of the House Nancy Pelosi exploded into their consciousness during the Trump era: a dominating, larger than life personality in a diminutive package. In this Female Force entry, the highlights of her life are told by a dueling elephant and donkey duo who struggle mightily in portraying Pelosi neither too favorably nor too villainous. In these times, the book becomes a rare and often humorous example of polite ribbing and healthy political discourse, where two opposing sides literally come to a table with the intent of meeting in the middle.

Moments of humor within a political context—such as jibes about President Bill Clinton’s transgressions—push this book to a teen’s level with just enough intrigue to persuade young readers to learn more about modern politics and understand the bigger picture. 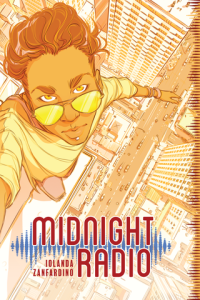 “Listen, please listen. Take a look at yourselves, right now…is this who you really are?” A late-night radio broadcast is interrupted by a mysterious message—one that hits four diverse strangers in different ways, yet catapults them all into interwoven stories. There’s Mike, stuck in a dead-end office job despite youthful aspirations for more, believing that civil unrest is a waste of breath. Joann, an LGBTQ youth coping with the guilt of surviving a hate crime at a local dance club. Seika, a marginalized immigrant forced into prostitution and police informant work to avoid deportation. And finally, Stephen, an emotionally stunted teenager who forgoes verbal communication altogether to pursue social media stardom. Zanfardino’s artwork stands out, both in her fresh depiction of each character, and the differentiation of each story through the use of monochromatic color schemes.

Filled with realistic touches of casual racism, sexism, and human struggle, Midnight Radio becomes four seperate, equally believable stories that examine a timely question: When will you follow your instincts instead of doing what is expected of you? 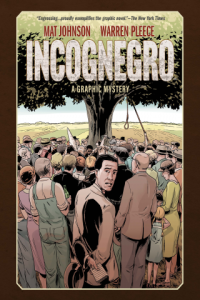 Incognegro: A Graphic Mystery by Mat Johnson and Warren Pleece

Inspired by the true undercover investigations of Walter Francis White, former NAACP leader and activist, Incognegro opens with a lynching. The scene unfolds in a way that is historically accurate in its cruelty and brutality, yet avoids being unnecessarily graphic in its portrayal. It’s just enough to immediately engage and righteously horrify readers. From there, a mystery unravels through the eyes of Zane Pitchback, a fictitious black man born light enough to “pass” as white—an attribute that allows him to get close to hate crime perpetrators in the American South during the 1930s. Pitchback is investigating the murder of his brother’s white lover, for which of course his brother has been framed.

Pleece’s art, like the subject matter, is black and white with shades of gray: effectively moving the narrative forward without ever detracting from the power of the story. This title represents a solid, painfully enlightening yet entertaining, example of 1930s noir with a relevant historical moment.

NOTE: A version of this article was also published by Good Comics for Kids.