LibraryPass, Inc. has announced a distribution agreement with Image Comics to make a range of titles from their digital catalog available to libraries and schools through Comics Plus. With Comics Plus, readers can access thousands of digital comics, graphic novels, and manga through their school or library—with unlimited simultaneous access for online and offline reading.

Founded in 1992 by a collective of bestselling artists, Image has since become the third largest comics publisher in the United States, publishing comics and graphic novels in nearly every genre, sub-genre, and style imaginable. It offers science fiction, fantasy, romance, horror, crime fiction, historical fiction, humor, and more by the finest artists and writers working in the medium today. It boasts multiple award nominations and wins across all categories in the Eisner Awards, Hugo Awards, Young Adult Library Association’s Great Graphic Novels for Teens, and many more.

“Image Comics is thrilled to partner with LibraryPass in bringing our diverse catalog of comics and graphic novels to libraries and schools across the nation,” said Chloe Ramos, Image Comics’ Book Market & Library Sales Manager. “We were particularly excited about offering our books through Comics Plus, because of its innovative unlimited access model, which we feel is the future of equitable digital library circulation. We’ve long said that comics are for everybody and with LibraryPass, we can really bring everybody comics, with no waiting and no hold lists!” 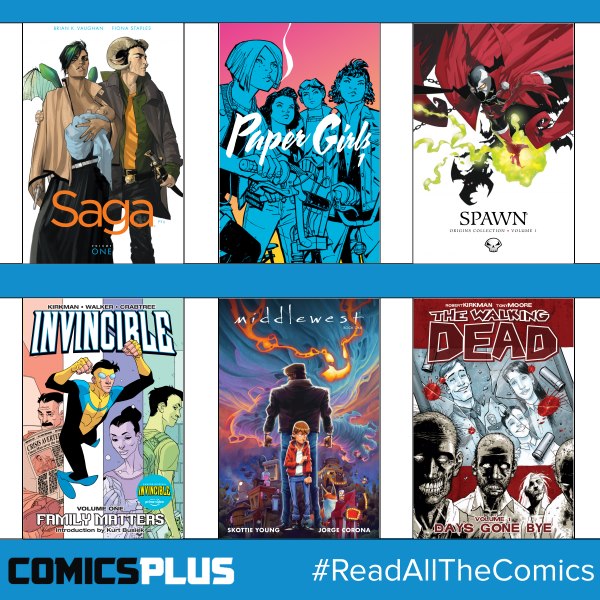 “We are excited to welcome Image Comics to the ‘Read All The Comics’ family,” said Guy LeCharles Gonzalez, LibraryPass’ Chief Content Officer. “They’re an innovative publisher with a compelling backlist that includes some of our most requested series and creators, and our readers will be thrilled to be able to read them on Comics Plus.”

Notable series from Image Comics now available on Comics Plus include Invincible, Kick-Ass, Monstress, Saga, and The Walking Dead, with more to be added in the months ahead.