Galaxies Near and Far, Far Away: Graphic Sci-Fi Recommendations

Science fiction is an enormously popular genre because it entices us to push the limits of factual science into a limitless fantasy of possibilities. Somewhere between science fact and science fiction is not just the known world or galaxy, but myriad multiverses of heart-pounding, thought-provoking adventures for explorers of all ages.

For avid sci-fi enthusiasts or those looking to explore new frontiers, our Galaxies Near and Far, Far Away collection offers a wide range of well-known franchises like Star Wars, Star Trek, Halo, and The Incal, alongside newer stories waiting to be discovered. The five titles highlighted this month ask readers to untether themselves from reality and delve into a galaxy of fantastical adventures. 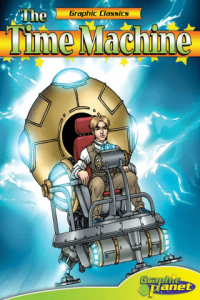 In 1895, a gentleman’s dinner becomes a marvelous trip into the impossible when their host, a time traveler, appears, bedraggled and exhausted, from what he claims was a trip 800,000 years into humanity’s future! The tales he shares from his journey are filled with action, danger, mythical creatures, and mysteries to solve in order to return to the present. One disbelieving gentleman seeks further information from the time traveler, but instead is left waiting for answers because the time traveler has already been whisked away by his invention.

This vibrantly illustrated adaptation of the H.G. Wells’ classic is a perfect introduction for younger readers, who will be filled with a sense of wonder by rich depictions of the future. Both the process of invention and idea of time travel are fascinating concepts for children, and The Time Machine can spark discussions and activities around inventive ideas and imagining humanity’s future. Valuable back matter includes biographical information, a glossary, and list of additional works to support curriculum alignment. 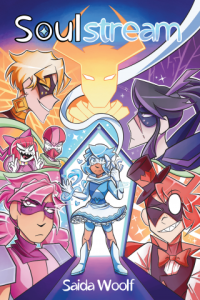 Marie is dragged out on a hike by her brother, Markus, despite the fact that she would rather be home playing RPGs. When the duo unwittingly stumbles upon a portal to a new dimension, her RPG experience pays off as she is whisked away by the Goddess Mage and dubbed owner of a Mage bracelet. Assuming the mantle of the superhero Soulstream, Marie gets a very cool superhero costume glow-up. Almost immediately, she and her brother are attacked by an unnamed villain. This villain is after Soulstream’s bracelet and almost triumphs, as Marie succumbs to her self-doubt. Soulstream prevails with her water control powers in time to win the first battle, but will she be able to save the world?

While the premise sounds heavy, it is carried out with a light vibe. Kids and tweens may see themselves in Marie’s character, who experiences a range of emotions including well-earned anxiety. Though this is just the introduction to the series, watching a flawed young girl step up to the challenge is inspiring. The story includes pop culture references that may eventually date it, but feel fresh and authentic. The bright, gorgeous artwork feels both contemporary and reminiscent of 80’s animation like Jem & the Holograms. Young girls in particular will connect with this updated variation on a traditional young reader’s adventure story. 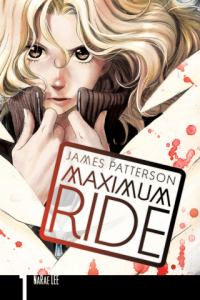 James Patterson’s Maximum Ride series has been reimagined for teenage manga enthusiasts! Max and her “flock” are children and teens genetically engineered to have super abilities. Their father figure, Jeb, saved them from the sinister scientists at The School, but has since gone missing. The flock is now living a secret life and working to overcome their traumas. The peace is shattered when genetically altered “Erasers” crash into their home and snatch Angel, kidnapping her back to The School. Max must lead the flock in overcoming their fear and rescuing Angel before she too becomes an Eraser.

What could have been another run of the mill action-adventure elevated by believable characterizations of sympathetic teenagers, with Max as a standout example. The bond shared by the flock is well-depicted through their arguments, youthful pastimes, and laughter. Max’s extreme sense of responsibility for her siblings is palpable and drives the story. The artwork, action, and tension are compelling but age-appropriate for Teen readers, with non-gory fight sequences. Back matter includes an illustrated narrative of NaRae Lee’s artistic process and a preview of series entree MAX to encourage readers to continue the saga. 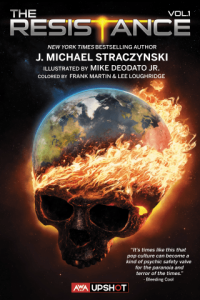 Celebrated creators J. Michael Straczynski and Michael Deodato unite to envision a whole new superhero universe. No one knows what caused the virus known as XV1N1, which doomed the human race, nor why it suddenly disappeared. No one, that is, except a small group of virus surviving “reborns” who became equipped with superpowers. Some may not be aware of their powers but, once activated, these reborns only have six months left to live. While the government scrambles to identify and capture them for exploitation, the Resistance forms, and they must move swiftly to evade the government, help humanity, and discover the secret of their own fates. The story plummets forward against a backdrop of growing societal degeneration.

The variations in backgrounds and characterizations of the reborn are the real intrigue here. The plot explores how different personalities react to both sudden superpowers and limited lifespans. Reactions include superhero capes and code names, to naive attempts at resisting fate. Deodato’s art is gritty and dark, suiting the subject matter and planting seeds of realism within the fantastical. Mature themes make this appropriate for older teens and adults, though no gratuitous content is directly depicted. In the age of a modern pandemic and civil unrest, The Resistance is not an escape, but well-crafted science “fiction” that will spark philosophical consideration and discussion. 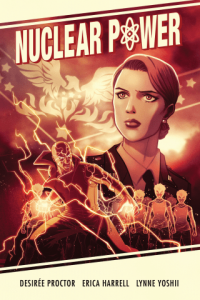 What if the Cold War had escalated into a nuclear conflict? Nuclear Power is set sixty years after an alternate history where thirteen states survived the nuclear war and formed the American Union. Governed by authoritarians and protected from nuclear fallout by a border wall, the story examines how far the new government will go to control this reality. Within the new world, Dr. Claudia Tocci is a pregnant scientist who begins to question the validity of the genetic tests she performs on expecting mothers. Dr. Tocci is kidnapped by Reed and Iris, two super powered “Variants” who live outside the wall. The Variant’s goal is to save pregnant women from forced abortions, a tool the new government has employed to terminate babies with special powers before they can join the Variant Resistance.

Co-writers Desirée Proctor and Erica Harrell were inspired to tell this story by their mothers’ experiences trying to assimilate in America after the Cuban Missile Crisis, lending chilling realism to a narrative refreshingly dominated by strong female characters. The corrupt government uses fear-mongering, intentional divisiveness, forced medical procedures, and media manipulation to control their people. This becomes a riveting examination of how far people in power will go to keep it, and how much it takes to get people to unite in defense of corruption. Presented on a yellow background, with collected issues picking a new duo color scheme, the effect feels authentic to the alternate-era and is visually appealing. Mature themes and sensitive topics make this title ideal for adult book club discussions, and a study guide is included.