Love is in the Air: Comics to Swoon Over, all Year Long

The meaning of love varies by person and even by situation. One can feel deep affection for another person and a favorite keepsake, although the sentiment differs. You can also feel affection for your significant other, your children, and your pets, but the level and scope are clearly different.

Many Western cultures celebrate love every February—even though the true origins of Valentine’s Day are murky—but romance is one of the most popular genres in every medium, and its fans know that Happily Ever Afters can be celebrated all year. Our “Love is in the Air” collection will satisfy your most avid readers looking for romantic stories, while offering great recommendations for new readers—whether they’re looking for True Romance or variations on the classic love story. Try not to swoon over these age-appropriate titles for the lovers and dreamers in all of us! 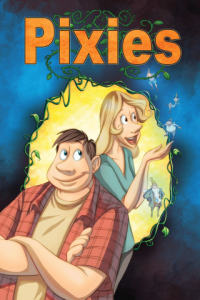 When Joe becomes cursed as a child for cutting down a pixie’s home tree, his life becomes full of nothing but luck that ranges from bad to worse. Foiled by vengeful pixies well into adulthood, including having his face smashed by the car door of his dream girl, Michelle. The pixies cannot infiltrate Michelle’s home as easily, and the respite from catastrophe gives the lovebirds time to bond. If Joe is to have a future with Michelle, though, he’ll need to reverse the pixie curse. A second romance also buds, between pixies Daisy and Samuel, but all characters must resolve to set aside their differences to move forward in love.

Young readers will find humor in the cartoonish, Looney Tunes-esque accidents that Joe endures, while the artwork is vivid and appealing, similar to Pixar animation. Pixies stands out as a not-too-mushy tale of love and adventure that’s perfect for young readers.

The First-Date Dilemma by Jane B. Mason, Sumin Cho (Capstone)

The sixth graders of Memorial Middle are all aflutter about an upcoming social event: their first “boy-girl” party! Lucia’s friends are excited, but Lucia herself has reservations. What will she wear? What if she’s the only person without a date? The dilemma is almost resolved when her crush, Adesh, is rejected by his own intended, Claudia. The loss makes him available for Lucia’s affections, until Claudia changes her mind! Now, Lucia is dateless, feeling peer pressure to attend, and caught in a love triangle with a boy she thought liked her back.

The drama and interactions between characters feels very authentic to anyone familiar with tweens and teens. Despite the romantic themes, this is a wholesome read for middle grade readers, featuring adorably frivolous back matter like dating statistics, character text exchanges, discussion questions, and a Spanish translation for Lucia’s family conversations. The First-Date Dilemma‘s vivid illustrations present a realistic array of young people that readers will surely recognize themselves and their peers in, thanks to its diversity of ethnicities and body types.

What started as a pile of personal doodles became a hit webcomic, and then the cute series of collected comics published by Andrews McMeel. Teens and older readers will relate to the mundane but sweet daily activities of John and Catana, whether they’ve experienced such a relationship themselves, or just aspire to. There is genuine humor in the cartoons, such as the “Trying to Be Romantic in Winter Clothes” episode, where the couple venture a snuggle only to be knocked over by comedicaly puffy coats. The final pages are a poem about how all of Catana’s life decisions have been for the better, because they led her to Joe, and a wish to live happily ever after.

John and Catana are cutesy black-and-white bobble-headed characters who stand out against limited background imagery, and any reader would have to be made of stone to resist the sweetness of their relationship. 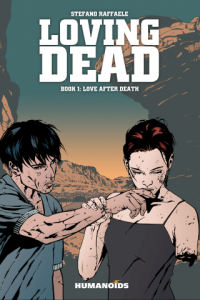 Loving Dead is a classic romantic tale: boy meets girl, they fall in love, and boy almost loses girl to decomposition… because boy and girl are zombies! Set in a post apocalyptic world, Alan is a carpenter until an accident puts him among the rising undead population. He meets Lynn and, despite the number of missing body parts between them, finds an end to the perpetual loneliness. Their bodies continue to rapidly disintegrate, and the lovebirds make a play for a future together.

In a world full of dangerous, warring factions, Alan and Lynn find out there are things scarier than death, but also worth fighting for. Like the swift cruelty of Alan’s untimely death, Loving Dead is a short entry into a longer saga, ending on a cliffhanger that will leave older teens and adults ready for the next chapter. Fans of the classic The Walking Dead will enjoy Raffeale’s artwork, as he brings the visceral elements to the forefront of his love story. Love juxtaposed against these odds is something all readers can root for.

Blade of Kumori has everything: modern-day samurai, epic action, strong female protagonists, and hot romance. After a lifetime of long, bloody battles, Kumori starts a fight she finds herself unable to finish—the murder of the handsome and charismatic Cameron. She moves on to successfully end wars and slay evil dictators, but when Cameron’s affections become clear to both Kumori and her longtime love Hiro, the tension heats up. Cameron brings his own romantic baggage and when they meet again, everything comes to a dramatic head.

Will Kumori risk dishonoring her clan, or will she carry the burden of doing what is expected of her? Bold artwork and brawny characters help immerse the reader in its setting, while near-constant action makes it feel like you are in a Tarantino film.